A cuppa and a chat with Andrew Carroll 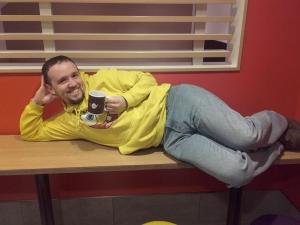 Every now and again, someone comes along out of the blue to completely surprise me with their multitude and mix of talents. In this case, it’s Andrew Carroll.

I was introduced to Andrew awhile back by my good friend Hazel Lake, and I must admit I didn’t know what to expect. We became friends over Facebook and he showed me his photography page, which was my first insight into how talented he is.

The second insight happened at a fundraiser Funzo put on for his girlfriend a few weeks ago, where Andrew stood on stage alone and sang Frank Sinatra “My Way”; the whole crowd went crazy singing along. His voice blew me away.

What I like most about Andrew is his humble nature and how quick he is to compliment the talents of everyone else. A true gent. Over the years, Andrew has met a lot of musicians and this reflects a lot in this EP.

Andrew worked with Aisling Jarvis, who produced/engineered/mixed & mastered the EP.  She’s a sound engineer who he has been playing bass and singing with her for nearly two years. Her mother is Moya Brennan, big musical family heritage there!  She doesn’t play any instruments on the EP, but her and her girlfriend Lauren join him for the intro of “I Got The Good Lord”.

Micheál Quinn from Meltybrains? plays on the first four tracks of the EP, who Andrew met while in NUI Maynooth. Andrew claims that he is one of the best drummers out there and that’s why he had to have him play on the EP.

This EP is really a fantastic production, and will be free for you all to download very soon. Listen to “A Cuppa With Andrew Carroll” below.

The post A Cuppa With Andrew Carroll appeared first on Ceol Caint.