A cuppa and an interview with Brave Giant 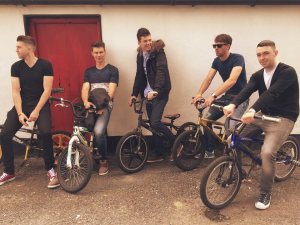 Having won the Le Crunch Apple of my Eye contest with their cover ‘Is this Digital Love‘ which went viral after they filmed it in their car, Longford band Brave Giant have been hot topic recently.

Always supporting local Irish music, and considering we all hail from lovely Longford, I was keen to have the lads in for a cuppa with.

They’re set to bring out their debut EP featuring original music such as ‘Lordy Lordy’ (below), and are planning on hitting Whelan’s, The Workman’s Club, Indiependence and Hype Festival over the coming months.

For a band who are yet to release and EP, these guys are making waves, already with a huge following and decent exposure behind them.

In an interview probably unlike you’ll hear anywhere else, I had a cuppa with Brave Giant in the back of John Browne’s bar in Longford, we discussed apples, going viral in cars and how if all else fails jingle making could be a lucrative business. Plus an exclusive nowhere else heard original Brave Giant jingle – just for us!!

Join me for a cuppa with Brave Giant:

Is This Digital Love:

The post A Cuppa With: Brave Giant appeared first on Ceol Caint.