A cuppa with Luke S 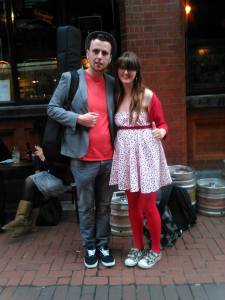 Luke S is a twenty-four-year-old singer-songwriter from Dublin. A mental health activist, he decided to pursue is dream of becoming a musician by committing to play 300 gigs in a year. Currently at 175, he has passed the halfway mark and is still going full steam.

As part of his three hundred gigs, Luke has established a brand new music night in an alcohol free setting. Luke S and Friends will kick off on Saturday, August 16 in Accents Cafe and Tea Lounge on Stephen Street Lower. The first night will feature Luke, with sets also from young rap pop trio Indifference and Dublin singer songwriter, Jeremiah Day.

Currently in a competition to win a recording contract among other great stuff from Media Fortress, Luke is vying to get the most views on his video. As it stands, he has 1,121 views but only the video with the top views can win. Check out Luke’s Summer Shindig video on the Media Fortress YouTube channel.

On the day he was announced to play Electric Picnic, Luke and I met in Accents for “a cuppa with”, unfortunately Accents was too busy (great to see however), so we found a quiet corner elsewhere to have a chat with instead…(no cups

The interview can be heard on Mixcloud below.

This is the Luke S video for The Media Fortress competition.

The post A cuppa with: Luke S appeared first on Ceol Caint.