Tea and a chat with Mongrel State 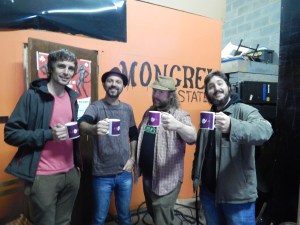 A couple of weeks back the lads from Mongrel State invited me around to their studio for a cuppa. It was a really cool insight into the life of the band, in what they call their “home”.

Mongrel State are a four piece band based in Dublin, made up of members with international origin (and one Sligo lad); all of whom claim they are proud to now be Irish musicians.

Their southern folk-rock tones are complimented with a Latin American twang, and what they describe as “honkytonk pianos & wide harmonies sitting side-by-side with New Orleans grooves”.

I was delighted they invited me round to hang out. During our “a cuppa with” we discussed their upcoming album, how they all met, and how the Spanish and Italian members of the band felt that Ireland offers more possibility to follow your dreams.

Check it out. Stay tuned for something extra special that the guys and I worked on coming soon!

The post A cuppa with: Mongrel State appeared first on Ceol Caint.