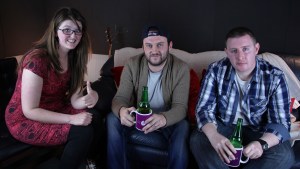 Hailed as one of the greatest acts of their genre both home and abroad, Stephen Young and The Union are a classic example of how pure talent, mixed with hard work are a recipe for success.

Now back on home soil, the five-piece are about to embark on an Irish tour, beginning with a gig in Sligo tomorrow (November 20)  and the album launch party in The Grand Social on November 27.

Four and a half years since their debut launch, this highly anticipated album is sure to see further success for the group.

On a blustery Tuesday evening, I joined Stephen Young and Johnny Byrne from Stephen Young and the Union on a road trip across Dublin. We reached our destination, and enjoyed a nice cuppa (as you can see) and donuts as we chatted about the album making process, breaking toes and the upcoming album launch party. They also played a song for us!

The post A Cuppa With Stephen Young and The Union appeared first on Ceol Caint.