A cup of tea, a chat and a whole lot of craic with The Dublin City Rounders 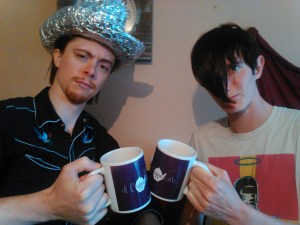 Brother musical duo Rohan and Al make up the stupendous Dublin City Rounders. Reaching deep into the past for inspiration, they explore sounds from 1860 till 1920 of American Jazz, Ragtime and Swing and re-create it with their own stamp.

Without a shadow of a doubt, a night at a Dublin City Rounders gig will have every seat in the house empty as the floor fills up with swing dancing. It is impossible to not be infected by their sound, it goes through your soul and right to your feet.

A few weeks back, The Dublin City Rounders invited me to their home for A Cuppa With. Excitingly, it was the first official outing of the cups and what a fantastic debut it was.

Talking about everything from jingle making, to the importance of spare underwear to tin-foil hats, The Dublin City Rounders are nothing short of entertaining in every way. Stick with it to the end, the review of the ginger cake is particularly delightful.

Also, I would like to thank the guys as a result of our jingle talk they produced an A Cuppa With jingle for future promotion. So I am delighted to not only introduce Rohan and Al from The Dublin City Rounders, but also to debut our brand new jingle!

Give the lads a but thumbs up! And listen in below.

You can also hear their latest releases in our Ceol Nua section.

The post A cuppa with: The Dublin City Rounders appeared first on Ceol Caint.