Tea and a chat with We Were Giants 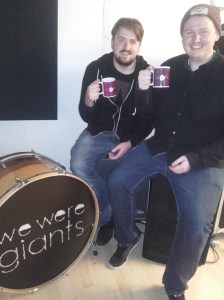 Having recently seen We Were Giants at The Ruby Sessions, I was keen to find out more about this amazing Irish band.

We Were Giants are a four piece band from Dublin who have been making major waves on the music scene in Ireland and abroad. Made up of brothers Colm, Ste and close friends Danny and Jay, We Were Giants have what has been described as a ‘sky-scraping indie rock band with an anthemic touch’.

I met with the two brothers in their cool studio in Inchicore for a cuppa with We Were Giants. We discussed the concept behind their recent video, recording with a top Scottish producer, and how well two brothers get on in a band. The quote of the series “we’re not vicious, we’re not like tigers we are like architects, skilled craftsmen!”

The post A cuppa with: We Were Giants appeared first on Ceol Caint.