A cuppa with: White Chalk 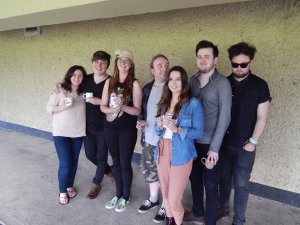 Fast becoming one of Ireland’s hottest bands, White Chalk have been touring extensively across Europe growing their already large fan-base.

Together as a band for two years, the seven music-makers are from Westmeath, Longford and Dublin. They have gained a large following in Ireland and Europe, enjoying extensive radio play and gigging constantly.

As if playing sell out shows in Ireland wasn’t enough, the band took on Germany playing support to Rea Garvey in eight thousand capacity arenas.

Speaking to me in Stuttgart in February, their manager Terry spoke about how smaller gigs are no use to this band, they are made for a bigger stage. How right he was!

The Backstage Theatre in Longford is a favourite for White Chalk; it is a hometown venue for some of the members. I caught up with them for a chat and a cuppa (plus a sneaky bottle of Miller) before they prepare to head back for a second, but this time headline, German tour.

The post A cuppa with: White Chalk appeared first on Ceol Caint.