A cuppa with Rachel Masterson and Steven Sharpe 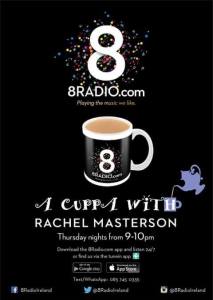 A sassy but soulful storyteller, Steven Sharpe tells tales about life and love with hilarious results. A blend of comedy with catchy lyrics and beautiful melodies, he has the ability to capture the reality of being gay, and the struggles faced on a daily basis.

In this week’s “A Cuppa With”, Rachel catches up with Steven to talk about his music, his anger at those who voted no in the equality referendum and about just how great a place Galway is.

With a mix of music from Jeff Buckley, Iggy Pop and Greenday plus three songs from Steven Sharpe, it’s a perfect way to enjoy a nice cuppa while listening to 8radio.com.

The post A cuppa with Rachel Masterson and Steven Sharpe on 8Radio.com appeared first on Ceol Caint.