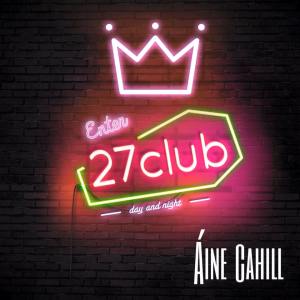 This is the latest single from the soulful singer, whose debut EP ‘Paper Crown’ and subsequent singles made waves nationally.

While Áine has been a homegrown hero in Irish music circles for quite some time, her persona is growing, with appearances in the Ray D’Arcy TV show and a recent tour of Camden in London.

Her style is instantly recognisable, the vintage mad hatter with an innate capacity to draw her audience in. She stands out effortlessly.

Her talent as a singer and her unique songwriting skills are evident; honing in on this tragic Hollywood sound while also separating herself from it. She’s cool, collected and offers an unparalleled ability to capture an idea right at the heart, and write beautiful music around it.

’27 Club’ is obviously in reference to the tragic demise of many talented musicians who died at that age. 27 became romanticized as an age to die, forever preserving that youthful talent and beauty that these musicians were so greatly adored for.

The song opens with how exclusive the club is, and being a part of it is very special. However, rather than romanticing it, Áine fixates on the reality that these people died, not because they were special, but because they spent their days drinking and doing drugs, and thus unintentionally fulfilling this destiny.

It beautifully captures the help that many of these musicians craved; anyone who has watched ‘Amy’ or any Kurt Cobain documentaries would easily agree. Dying at 27 wasn’t so much the dream, but escaping the traps of fame was. Unfortunately, drink and drugs offered this eternal escape.

27 Club has that distinguishable Áine Cahill sound, which will without a doubt send her into that Amy Winehouse level of fame. While it may not be the hit that sends her to stardom, she’s certainly knocking at its door.

Áine Cahill 27 Club will be available on iTunes very soon, but for now check her out singing it live. Also, check out the ‘A cuppa with Áine Cahill‘, we did awhile back where she sings Black Dahlia live.