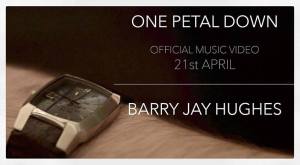 One Petal Down is the brand new single from Monaghan musician Barry Jay Hughes, who is preparing for the release of his second EP ‘Tried and Treasured‘.

One year on from his debut, the singer-songwriter has come on leaps and bounds from his initial attempt. While this song was written around this time last year, his presentation of it is that of a more mature musician who has honed in on his craft in the last twelve months.

Considering the extensive touring undertaken by Mr Hughes, it’s really no surprise that he has come into his own with this new release; with the addition of traditional musicians creating a fuller sound.

One Petal Down looks at the stark reality that no matter what, we really are all the same in the end. The video is a simple concept, bringing a room full of strangers, with evidently different styles and tastes, together to eventually form a bond.

The simplicity of the video is what makes it altogether more appealing, and the story leads us on the short journey of these individuals encounter.

There’s a vivid use of colour in the song, allowing it to really paint a picture. It’s a really passionate perception of the delicacy of life.

One Petal Down is a strong release from Barry Jay Hughes, and an interesting insight into what’s to come on his Tried and Treasured EP which is released on April 30th with a launch gig in Ionatas Theatre Monaghan. He will play Whelan’s Dublin on on May 18th.