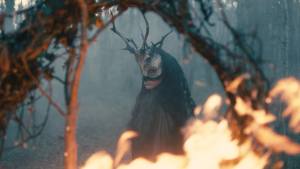 Half Irish, half Palestinian but Galway native Roisin El Cherif has just released this stunning video for her equally breathtaking and haunting song Kerosene.

Kerosene is a fabulous and mystical effort, surrounded by fantasy.

The video is steeped in Gothic imagery, reminiscent of a heavy metal video but combined with Roisin’s unforgettably sensational voice.

This was an ambitious project which Roisin herself wrote, co-directed and produced using skills attained during her media background.

The lyrics are well-crafted with a sort of tribal theme running through; very effective alongside the video.

Looking forward to seeing a lot more from this unique talent soon.