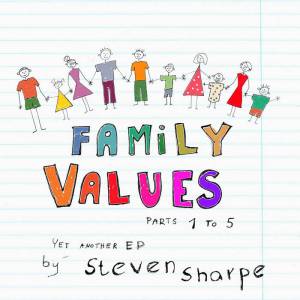 Family Values parts 1-5 is the latest EP from Steven Sharpe, as he attempts to air how pissed he was about the equality referendum. None of the songs have names, so part 1-5 make up each part of this story.

The EP was Steven’s way of voicing the contempt he felt surrounding the referendum, and some of the experiences he was personally faced with. While the country argued over the rights of equality, Steven admits that the fact it was even up for debate, proves the imbalance in our society.

In an entertaining way, Steven addresses the dark undertone of what it was like to be a gay person at this time. He sings about how “734,000 people then kicked me in the teeth”, in reference to the number of no voters, a number which Steven said he struggled to get out of his head.

The EP is witty, honest and effervescent, encompassing the charm that makes Steven such a lovable artist. It deals with really serious issues of suicide and being made feel unequal around a time where people were arguing the rights of a balanced society. Steven argues that how can we be a balanced society, if the rights of the minority are ruled by the majority; it could have gone either way.

In less than 15 minutes, this EP captures the entire spirit of the atmosphere at the time, the small minded conversation and the complete edge everyone felt pending the result.

For comedic value alone, this gets a ten out of ten from me. However, delving deeper into the darker message behind the animated lyrics; Steven as ever has a beautiful way of making us all really understand how it feels to be singled out and having to defend your own existence to people you have never even met.

Everyone should buy this EP, and play it really fucking loud. Teach a few people a thing or two about real “family values”. There are at least 734,000 people who need to hear it.

Check out my “a cuppa with” Steven Sharpe where he tells me about the emotion surrounding the EP.