The Crayon Set pay tribute to 1916 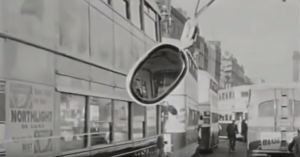 For the weekend that’s in it, here’s more amazing music from The Crayon Set; paying tribute of our national heritage.

Released around Easter Weekend, we thought we’d give it a plug on the actual 1916 anniversary.

O’Connell Street 1916 is once more a testament to the incredible song writing skills of The Crayon Set. It’s a heartfelt story of real life Dublin; Jim living on crisps and John Player Blue and when Paul took his life, and took hers too “everybody knows your problems but they don’t know how to solve them, on O’Connell Street”. Completely moving.

While 1916 is just out of living memory, it’s still recent enough that we can feel the influx. O’Connell Street and surrounding battle ground stand relatively trouble free this present day, but there’s enough evidence of destruction to really imagine what it was like.

The Crayon Set effectively use this imagery, piecing together the perfect tribute video to accompany their tale. Visually, the video is an unrivaled insight into the times. It’s spectacular that they pulled all the footage together.

The Crayon Set really stand out as one of the best Irish bands at the moment. They have an innate story telling ability which is so hard to come-by nowadays; capturing the heart of a subject and telling it through song. They have that old school quality, like The Divine Comedy and Pulp; while not a directly similar comparison musically, but that unique timeless quality that captures you in the moment and reignites you every time you hear it.

The passion behind this song is heartrending, and if you don’t do anything else to celebrate our nations birth this historic of years, make sure you listen to The Crayon Set, O’Connell Street 1916.