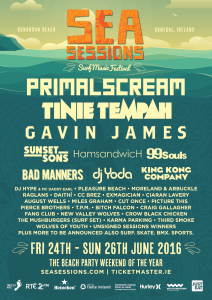 The stage will run from 4.00pm-10.00pm on the Saturday and 1.00pm-10.00pm on Sunday. Not only will the Apres Match team be making an appearance but fellow comedian Karl Spain and five scheduled Second Round Euro 2016 matches will be screened on a giant screen.

This isn’t the final announcement either. There’s more acts and plenty of sport events details to come too!

Tickets are available from all Ticketmaster outlets nationwide, www.ticketmaster.ie and www.seasessions.com priced from €99.90 for 3 days and €124.90 including 4 nights camping. There’s also limited day tickets available from €47.50 and VIP upgrades from €50 extra.