An Evening With Monster Monster in Mart this Sunday 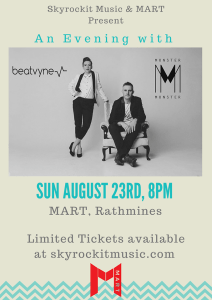 Sunday evenings will never be the same once you have spent an evening in Mart. Launched by Skyrockit Music, “an evening with” brings together musical talent mixed with plenty of talk.

Creating an evening of bonding through music, the event will showcase the country’s best and brightest. Not only will you get to hear their songs, but you will listen to their stories in a fun and relaxed atmosphere.

Having teamed up with new musical platform Beatvyne, who also aim to build a connection between musicians and fans, Skyrockit are offering something really special. You will get to personally know those wonderful musicians whose lyrics fill up your day.

The first ever An Evening With will see Monster Monster take the spotlight, with Aoife King from The Sound Feed and Stephen White from The Last Mixed Tape leading the discussion.

Monster Monster are Dublin based duo Mick Stuart and Ríona Sally, who formed as all best musical couplings do; to prove a point during a row. It worked. The pair have gone on to release a number of hit songs together; such as the fantastic Assassin which will be officially released September 25.

Support on the night will be from Loop Culture who are really making waves on the music scene; getting through to the semi-finals of the ‘War at The Button’ music competition.

If you’re wondering what Mart is, it is the setting of the old Rathmines Fire Station, now a creative art space. What better way to spend a Sunday; a unique space, fantastic music, new friends and BYOB…

WHAT ARE YOU WAITING FOR?!

Buy tickets on the door or from Eventbrite here.