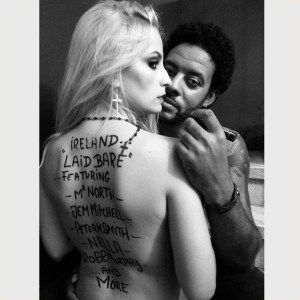 Ireland Laid Bare is a brand new compilation album featuring a mix of sixteen Irish artists. The brainchild of Rock Singer and Lonely Child artist ‘Peter M. Smith’, Ireland Laid Bare showcases some of the best of Irish music, proving what fantastic musicians we have on offer.

Saying that he could have put 100 artists on the record, Peter chose a select few out of a vast pool of talent.

He continued; “‘Lonely Child Music’ exists in part because of artists that are featured on this album. Those who have been struggling for years behind the scenes to gain exposure amidst the politics and financial restraints, and the artists who are brand new on the scene who had seamlessly carved out a promising career in a short space of time.”

A professional footballer who has silently been honing his craft, and now tours with Brian McFaddden, as well as playing at Katie Taylors medal winning homecoming to 30,000 fans, and accompanying Gary Barlow on The Late Late Show (Robbie Doyle).

A newcomer to the scene who’s 2FM appearance went viral with 70,000 views, Sold out their first headline gig in Whelans, and absolutely nailed it at this years Electric Picnic, as well as playing to support to greats such as Jerry Fish, Duke Special & The Strypes (Áine Cahill).

A band that has been around since the 1990’s, and are simply as good as, or better than U2. They have played all over the world on the biggest stages with the likes of ‘Van Halen’, ‘The Who’ & ‘Kings of Leon’, it’s time to bring these guys home (Mr. North).

No stranger to the music industry at home or abroad, notching up fame from ‘Popstar – The Rivals’, and with UK Chart success with his band ‘Phixx’, Ireland Laid Bare also includes the brainchild of the operation (Peter M. Smith).

The Ireland Laid Bare album is available on Spotify, Amazon and iTunes now.