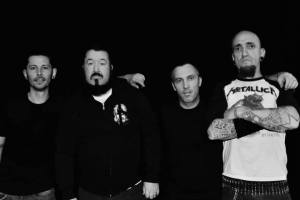 The speakers in the Ceol Caint HQ have been blown apart by the rip roaring debut album from Cork band MindRiotmt – Brothers.

Having stunned in a live performance at Indiependence, this album was one which held a lot of interest; and it did not disappoint.

Far from the days of being a heavy metal loving teenager, the initial reaction to this album is that it’s loud, very loud. The subsequent action being to turn it all the way up and let the rock take over.

Hard rock like this isn’t something which emerges quite often in Ireland; correct me if I’m wrong, maybe it’s just something I’m not exposed to too often. Among a sea of folk and indie, MindRiot are like a wave crashing down with unforgiving rifs and powerful vocals; it’s seriously refreshing.

Having been a heavy metal fan throughout my teens, I know it’s quite an easy genre to do badly, and when a band as good as MindRiot come along it’s something to get excited about.

Brothers is good, it’s really fucking good, and not unlike anything The Deftones or Tool have released over the years. To place MindRiot on a pedestal next to these acts is saying quite something.

The energy they discharge is powerful, offering a tight sound from a four-some who know know their instruments, eachother and who they are as a band very well.

A theme of mental health struggles runs through the album, which may account for that tight sound, as they all do know eachother extremely well and can equally relate to the pure anguish mental health problems can bring.

Anyone who has had experienced mental health issued in their life, either themselves or through a friend or family member, can elevate to a new level of understanding of how un-comprehensibly debilitating a mental illness is. Having lost a friend to suicide, MindRiot have an unfortunate insight into just how bad it can get.

The album stands out as one which will be unrivaled by any other rock act for quite some time. Their sound is so distinct, without ever straying from who they are. With impressive vocals, fine melodies and a robust eruption of guitars and drums, Brothers is an animated spirit which oozes intensity.

Each song offers something new, and it’s that variance which keeps it interesting; there are very few full albums which can hold my full attention, but with Brothers I could easily listen to it twice on repeat. This is definitely one band who I’ll make it my business to see live, as often as possible.

MindRiotmt will officially release their debut album Brothers on February 19.