Far From Daylight by The Blood Red Mountain Band 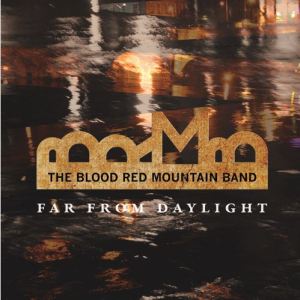 Finally, I’m going to write about how much I love this album. Far From Daylight is the debut, number one album from The Blood Red Mountain Band, released in 2015.

From the offset, the album instantly grabs your attention; the rich, polished sound enticing the listener to really absorb what’s happening.

Beginning with “First Light”, a nineteen second instrumental which starts off easy gradually increasing; similar to an alarm clock inviting you to wake up to this album.

This smoothly interjects into “All the Times”; a charming number which perfectly introduces the flawless harmonies and beautiful lyrics to come on the rest of the album. Somewhat seamless, the harmonies offer that consummate contrast between male and female vocals, allowing for the idea of forlorn lovers reciting to one another.

The third song “Stars from the Main Street” establishes the male solo taking the fore; a soft country vibe which is tender and feel-good.

Next up is “Fair and Tender Ladies”, and an opportunity for the female singer to shine. This has a delicate vintage feel, with an ambiance of the deep south. It has that sweetness of a mother singing to her daughter, giving those simple life advises that her mother passed down to her.

“On These Waters” is my favourite track on the album, the number that is sure to get any room onto their feet. They manage to rhyme “and I wish I learned to swim”, with a perfect slight pause allowing you to savor it before continuing “I wouldn’t feel in over my head” and ending “it’s the stars that make me sing”. It’s the “yeehaww” (for want of a better description) song on the album which is just full of swing, but with those “ahhh” moments for such alluring lyrics. It’s a wonderfully crafted song with airs of bluegrass, country and folk.

Onto “(I’ve Got You) On My Mind”, a more mellow affair, bringing back that male and female arrangement. “When it feels like winter but your hearts on fire”, “I dream of the sun as the cloud waltz by” and “When you kiss like summer being washed in the rain”, again is a reminder of the atmospheric storytelling that flows through the album.

“My Sweet Rose” is a rockier number, the liveliest of all on the album. Demonstrating the powerful vocals throughout the band, and the versatility that they offer, it is evident of their talent as musicians. If ever there were a band who couldn’t be characterized or pegged as a one trick pony, it’s The Blood Red Mountain Band.

Next is “‘Til the Wheels”, which returns to the folk style narrative of two lovers and a car which is about to give up, taking off into the sun, making the most of what they have.

“Trial” is a more somber affair, the country twang evident in this conversation with the Lord. The same with “Lucy Jackson (don’t you break my heart)”, although one of the more energetic offerings.

Like “First Light” woke up the album, “Last Light” winds it down. Finishing with “Catch You When You Fall”, a charming, and captivating end to what is a delightful debut.

The lyrics are opulent; so finely tuned, mixed with effortless harmonies, rich instrumentals, and that perfect balance of country, rock, folk and bluegrass that it can’t be defined as any, but can be enjoyed by all. Each song is a perfectly carved tale, clearly illustrated and effectively delivered; full of emotion and powered by passion. The vocals are engaging throughout, while the instruments support each song without ever intruding. At no point does anyone interrupt, but a seamless offering from all sides makes this album smooth and flawless.

Highly recommended for fans of multiple genres. As far as their live performances go; incredible. Definitely a band to catch in 2016 during their “32 County Tour”.