A catch up with Chase The River 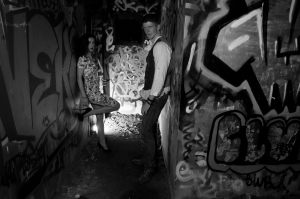 Chase the River are a two piece band from just outside Belfast. Made up of Stuart Lunn and Lizzie Little, the band are really still in infancy at only ten months old. Saying that, they have achieved a lot in a short space of time, gigging constantly and even being nominated for two Pure M awards.

Check out “A catch up with Chase The River”:

How did the band form?

The band was originally formed about 10 months ago, although with Stuart and Lauren Molloy, we bumped into each other at a showcase gig as solo performers and went from there. The music was written by Stuart and the material for the 1st EP was there from day one, it was a case of getting it arranged and recorded in quicktime. After a while the chance meeting turned a little bit strained and Lauren lef the setup. So Stuart took a bit of time and worked with a few people to find the right replacement. Interestingly he met Lizzie after a covers show in a local bar and they got to talking about music and it turned out Lizzie was a singer with a superb voice. So that made the decision pretty easy.

How long have you been writing originals?

Since I was about 15, so 14 years ago now. I started as part of my GCSE in music and never really stopped, it was about the time I picked up a guitar as well so its been a long long time.

How does this process work collaborating together?

Collaboration is a difficult thing I think. I think musical partnerships are themselves kinda like a sexless marriage. Stuart writes the most of the raw material, a process that is normally very very quick (Lies and the crimes took 30 minutes and it is a 7 minute song!). Sometimes the guitar riff comes and inspiration is sitting there. Quite often the original write comes after you have given yourself distance from your instrument. If I cant write I would normally take a week away from the guitar, clear my head and get focused on other things. Then I would bring the songs into a practice and we would sit down and cut them to shreds and rearrange them and change a few things. The key to this is I (Stuart) wont come into this part of it with any fixed ideas on the final arrangement. Lizzie is an amazingly talented arranger and knows what Chase the River is about and gets my half baked notions down to final songs and keeps the minimalist approach, the key to any collaboration is leaving your ego at the door.

You’re were finalist in the Pure M awards; what category?

We were a finalist in the Best EP section of the Awards. We were nominated for Best Irish act but alas we didn’t make the cut.

How does it feel to be award nominated after a relatively short time as a group?

It is genuinely amazing. In truth Chase the River was a half formed idea which originally was going to be my bit on the side from solo work, but a good friend after our first show sat me down after and explained what we had tapped into, and from there it took over. You know I am my own worst critic, I really struggle to be positive about a lot of songs I write after the initial pride, but that is part of it, they are parts of your soul on display for public consumption and if I wasn’t critical about what I do and how we perform, we would be half assing it. But getting back on point other people seem to really connect with what we are doing and trying to say which is basically the single greatest compliment you can receive as a songwriter.

When was your EP released?

How long was it in the making?

Embarrassingly, we recorded the whole thing in 1.5 days. We took a decision to really go raw and do live room recordings. Nearly no overdubbing, a few additional tracks but live recordings without click tracks or any real standard ‘recording sessions’. We used Declan Legge at Big space studios who is a gentleman and a legend and he filled the room with loads and loads of mics and picked us up really beautifully.

How did you feel about the final result?

It is a mixed feeling if I am honest. We had to get it out there in short order and it shows in certain parts. But that being said for the amount of time we had in the studio it is more than I would have hoped for.

How is it being received by fans/friends/family?

Its been received really well. I have a lot of musician friends who have been really supportive and yet critical and pointed me in certain places to where we are going wrong. I try to avoid non critical feedback from my mother or brother etc because that blows smoke. It’s out there to be digested and I am just glad people are enjoying it.

You’re gigging a lot, and recently did 6 gigs in one weekend! What do you like most about playing live?

Yeah the gigging schedule has been a bit hectic recently. And really varied, coffee shops, bars, train stations for Tennants vital, showcase gigs. That weekend in particular was insane, there was even a daycare centre in there. But the best thing about playing live is a quiet satisfaction. When I am maybe even doing a cover set at a bar and you maybe play a ‘lesser known’ song and someone tunes into you, you can see their eyes light up because they know it when few others do. I think a lot of musicians have it the wrong way round when they think an audience should show you appreciation for all your hard work, I really appreciate the privilege of playing for others, for making a memory for them, that’s the whole point. If I can spark a memory in someones mind or connect with them on some level, its a real privilege.

Which do you prefer: live gig or studio recording?

Nice question. I think live gigging. The studio is awesome but it is a totally different pressure. I mean you play live week in week out and it is natural but a studio Chase the River are trying to achieve an organic sound in a clinical environment, and that is difficult. Also if you make a balls up in the studio, it is there FOREVER. Live mistakes can almost be endearing.

What is the best part about being a musician?

It’s free therapy for me. All the other stuff, social media, day job, housework, its a bit of a stress. Music lets you show a part of yourself that words never can. I mean I could tell you the story behind 4am off the EP, but it would take ages, listen to the song, its 4 minutes. And yet there is a part of me in that song, but a different part of someone listening to it connects to it for whatever reason, which is just amazing (and also why I will never tell the reasons behind a song, in case it loses meaning for someone else).

Who are your major influences?

How long is this article going to be, so many to chose from. I love some of the real classics, Jeff Buckley, The Civil Wars, Damien Rice. I also love Ryan Bingham, he is a greatly under-appreciated artist. Ironically I try to avoid my influences when I want to write, so I am a big big metal fan and prog rock. I cleanse my pallet with those guys, so Coheed and Cambria, Dream theatre, Pearl Jam, Rush, Bullet for my valentine, Porcupine tree, Smashing pumpkins, they allow me to remove myself from what I do so I can get back to it stronger.

Where do you hope to take the band over the next few years?

Well we are getting ready for an album at the minte. We need to get Lizzie down on the CD and let everyone marvel at what she has brought to this party. So a few of the EP songs will probably get an upgrade and then some of the new material which is a natural evolution with things. The EP is out there so expect a single release before the end of the year with the album to follow. From there it is getting it to grow they way it has and get the momentum built up. Look, we love what we do, and we will keep doing it while we love it and wherever we can make it to we will.

Here’s a video of Chase the River performing in Smithfield:

Check out Chase the River on Facebook for updates or their bandcamp for more music.

The post Getting to Know: Chase The River appeared first on Ceol Caint.