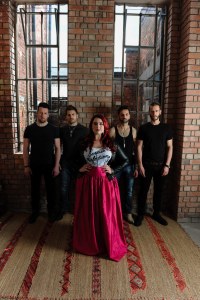 Two musical acts that banded together to become one, Jess and The Bandits formed an alliance, having connected while on tour together. Jess, a soulful Texan with a voice which would uplift the quietest of audiences, joined with UK band The Bandits over a mutual love of country music.

Having recently released their debut album, ‘Here we go Again’, it was time for the group to headline their own tour. With dates all across the UK and one Irish show, it is sure to be an exciting launch of a very promising career.

Ahead of their Whelan’s appearance Saturday, October 24, Ceol Caint catches up with Jess of Jess and The Bandits to find out how they all met, how she handles the men, and their plans for the future.

Is this your first time in Ireland?
No actually, we’ve been a few times on tours with The Overtones and Boyzone as well as for promotional tours. It’s one of our favourite places, the people are so friendly!

Jess you’re from Texas, and The Bandits are from the UK, How did you all meet?
We actually met on an Overtones tour. I was the support act and the Bandits were playing for them. We instantly bonded and then as we got to know each other we found we had a lot in common musically. Before we knew it we started working together and then became a band.

Your debut album was only recently released, how long was it in the making?
It took a little over a year. When you’re releasing your first album, you have to make sure it’s perfect. We spent a lot of time writing and making sure it was the introduction we wanted as a band. We’re really proud of it!

You’re at the beginning of your own first headline tour, how exciting is that?
SO EXCITING! Also very scary. It’s hard branching out on your own when you’ve been supporting other artists for a while but we think it’s going to be great and are thrilled that we’ve sold out or almost sold out some of the dates. There are tickets still available though.

Jess, how do you feel about being the only girl touring with a bunch of guys?
I love it! I grew up with brothers so I’m used to being around guys. Typically there is a lot less drama with guys, I’m a no drama kind of girl. Plus I’ve never minded being surrounded by a bunch of attractive men :-).

How does it work as you still technically live in America?
It’s easy, I just hop on a plane and then 10 hours later I’m in the UK. I pretty much just make my way over anytime I need to, which seems to be very often these days. I’ve spent the majority of this year over on your side of the pond. It’s nice to get home when I can, even if it’s only for a couple weeks at a time.

What are you most excited about for the tour?
The whole tour in general. Doing something of our own and performing for our fans and hopefully getting new ones.

What can people look forward to from a Jess and The Bandits gig?
An amazing show with lots of energy from start to finish! With support from bands like The Rising and NaFianna we know people are going to have a great time. We will definitely do some fun covers and all of the fan favourites of our album. This is a gig they won’t want to miss!

What plans have you got for when this tour ends?
Lots and lots of writing! We are starting to think about the next album and songs to have later down the line. We definitely want to spend any free time we have starting the creative process again.

Tickets for the show are €15, and can be purchased from Ticketmaster. More information on the Jess and The Bandits website.

The post Getting to Know: Jess and The Bandits appeared first on Ceol Caint.