Getitng to know Monaghan band Litehouse ahead of their debut release 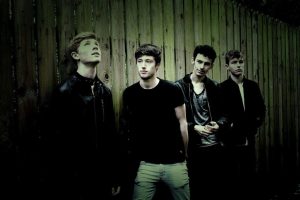 A four-piece rock-pop outfit from Monaghan, Litehouse don’t allow the confines of school let them get in the way of pursuing their musical dream. As seems to be the case with many emerging acts nowadays, Étain and The Klares spring to mind, these talented school goers spend their spare time crafting their music, paving the way for future success.

While some may question the disruption of schoolwork with band practice and gigs, Litehouse prioritise when they need to, with their over all goal of following music always in mind. Passion pours from these guys, who have an evident talent.

Their single “Blackcats” is out this Friday, with influences from The Strokes and The Libertines shining through. Ahead of the single release, Ceol Caint caught up with the band, for our “Getting to Know” segment.

Currently, Peter and I are in 5th year, Colin is in 4th year (Transition Year) and Ben is in lower 6th. The band started mid way last year, which was hard to work with because Colin was doing his Junior Cert and Ben his GCSE’s, while Peter and I had loads of free time. Practice was hard to organise, but we pulled through. This year has been a lot easier from the point of view of no exams. It definitely gives us a lot more time to write and rehearse new material. –Keelan

2. You only formed this year, and the debut single is out this month already, how long did it take to write?

It really seems longer than a year for us. We have put so much work into music in general over the last 9 months, whether it be writing, recording or gigging. The single was the first song we wrote, where everyone was completely involved. It only took us a couple of hours to write but when we went into studio our thoughts just came to life. One day in practice, Colin brought up a rhythm guitar line he had been working on, where I came up with a riff to follow. He already had the first verse of the song written, so once we got to grips with it Ben and I added some lyrics and Peter added the beat. The song was completed and ready for demoing before the end of that practice, but for me, the studio time added so much to the song and I’m so excited to see what people think of it! -Keelan

3. You are still in school. How hard is it to juggle the music and school work?

Considering that the gigs are on in the weekends during the school year, it isn’t too difficult as long as you just get the stuff done in the time that you have, then everything runs smoothly! -Peter

Its not hard yet. I’d definitely expect things to get tougher in the next year but we wouldn’t let it swallow us up. If we achieve the goals we set ourselves between now and then it will hopefully make things easier for us. -Keelan

4. What musical background (if any) do each of you have?

I grew up listening to mainly my dad’s music, which were the classics, like, E.L.P and Rush, so I was constantly listening to music from a young age. It was bands like Rush that got me into drumming when I was 11 and then gradually, I expanded my music taste from solely classic rock to the likes of funk, jazz, swing, alternative and harder styles of rock. It has always been a passion of mine and I don’t like being confined to one style when I’m drumming, I would like to strive to keep expanding my music tastes in the future. Music is definitely at the top of my key strengths as a person and it would be a dream of mine to pursue a full career in music and performing. -Peter

My music taste has completely changed a couple of times. I started out listening to bands like Guns and Roses and The Red Hot Chilli Peppers. A few years later I was into The Black Eyed Peas. Then onto the likes of Paramore and All Time Low! They were such drastic changes I have no idea how I introduced myself to them. Currently, My favourite 3 bands would have to be Catfish and the Bottlemen, Kings of Leon and Circa Waves, but I’m really enjoying The Academic’s new EP ‘Loose Friends’ too! They’re definitely having the biggest influence on me from an Irish band. I started to learn guitar when I was 10. I actually quit after two months! I picked it up again when I was 12. I just taught myself at home and kept going from there. -Keelan

Well for me, none of my family had been involved in music bar a love of it from my dad with his vinyls and mum with her live music. Being surrounded by music played on mixtapes in cars and on record players throughout your life, just has a natural impact on you, but for me, the music video for ‘I Bet That You Look Good On The Dancefloor’ by the ‘Arctic Monkeys’ is what did it! The one where the drummer looks directly into the camera and winks? It’s basically them playing the song live. It’s their only official video for the song. Seeing that made me want to be in a band! I wanted to be a guitarist, I just wanted to play that song like they did and it all stemmed from there. -Ben

After I moved to Monaghan from Dublin I started to tap to songs I heard on the radio. I thought this was a sign that I should play drums so I decided to get lessons when I was about 12 or so. During this time I found out my best friend had a crappy drum set in his attic that he never used so he gave it to me for free (we use this drum set for rehearsals as Peter seems to think they are good, or else he’s too lazy to bring his drum set to my house!!?). After a while I went through a phase where I love the band ‘the vamps’. I really liked their bassist and thought he was so cool. I then decided to start to try and learn bass. I had two old guitars in my house so I used the top four strings on them to play bass. After I learnt a few songs I lost interest in it and moved onto my next phase. After about a year I met our lead guitarist Ben. He taught me basic bar chords on the guitar and got me into different kinds of music like rock and indie…as all I was listening to was fake and manufactured. After this I started to learn’t the ukulele. I moved from the drums to the ukulele to the guitar and now I’m on bass. I had been playing an old bass I borrowed off my friend when I saw this class two piece band on a local talent show in our school, called Litehouse. As soon as I saw them I thought they were amazing and really wanted to join. Keelan had played football with my brother but I never really knew him that well but out of the blue I text him one day saying that I play bass and if they ever needed a bassist to give me a shout. I surprisingly found out Ben was joining the band as well which was a big advantage as we had been playing together all summer. -Colin

5. What made you decide to form a band?

Peter and I had been playing together just for the craic since we were about 14. We always kinda knew we were going to form a band but we just couldn’t find the right people up until we met Ben and Colin. We’re so glad we did because the last few months have just been mental! -Keelan

6. How often do you play gigs?

It really depends on availability and what’s going on. Up until a month ago, we had been playing 2/3 gigs every weekend since the end of the summer! Things have slowed down coming up to the launch of the single. The plan is to build for the Summer. Plans are already coming together! Its going to be busy! We love when we can get a crowd that are just up for a laugh and can come out and jump about and not care! That’s where we get the enjoyment from gigs. We just want people to enjoy themselves and the music. -Keelan

7. What has been you most favourite gig to date and why?

Choon commune, the crowd were electric and we played loud and fast, that’s what it’s all about for me, when the crowd are there to have a good time and it’s not just about playing, it becomes a performance and I’m trying to put on a good show for the crowd. -Ben

For me, the best gig was headlining Muckno Mania. It was the first time we had played to a crowd of that size and it gave me a great buzz! -Keelan

My favourite gig to date has had to be the choon commune organised by a fellow musicians to give new bands a chance. We were one of the headlining bands for it. It was the best gig for us because of the energy of the crowd with people crowd surfing and going absolutely mental. We were all really hyped for this gig and it was the first gig Keelan showed what a great lead man he is. He was crowdsurfing while playing a solo from a song which was unreal. -Colin

8. Where can people catch you play next?

We have no major plans for the next few weeks, we’re going to take a few weeks to write some new stuff and then get back to gigging just before Christmas! If you like our Facebook page or follow us on Twitter we will keep you up to date on what’s happening! -Keelan

We’re mad to get back into studio, it was such a great experience and it added so much to our sound, but we have to be patient. Nothing has been set in stone in terms of dates. We’re constantly writing new material, but we want to be completely happy with everything before we decide to record anything further. I’d guess and say it won’t be until the end of 2016. We have loads of time considering our ages but we’ll see! Whenever we feel we are ready we will give it a go! -Keelan

10. What are your plans for after the Leaving Cert? College or follow the music?

It depends on how things go until its time to decide! We don’t know what way things will be in 2 years down the line. Either way, it won’t be an easy decision. -Keelan

Plans for after school are to see what happens in the next few years and if they are successful years, then I would like to keep doing it in the future, which I intend on doing anyway! –Peter

I plan to study graphic design in college, but my passion is music. If I could pick music I would. It’s a dream of mine that I’d love the chance to fulfill. -Colin

The Litehouse debut single “Blackcats” is out this Friday. Connect with the on Facebook and Twitter to keep up to date with the release, and with future gigs. You can expect big things from these lads in future.

The post Getting to know: Litehouse appeared first on Ceol Caint.