Getting to know the band Mannequin Sex Drive 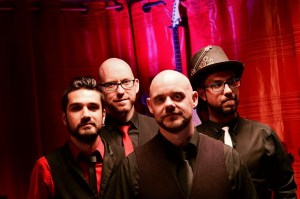 Introducing themselves as the world’s first and only electricousticrockinfolkpop band, Mannequin Sex Drive offer an eclectic mix of musical fusion. Hailing from various corners of the world, from Brazil to Clare, the band formed back in 2013 and have rapidly grown since. With a number of singles, award nominations and award wins under their belt, Mannequin Sex Drive are ones to watch. Ceol Caint wanted to get to know more about Mannequin Sex Drive, so fired some questions their way.

Firstly can you tell me who is in MSD and a bit bout each member:
Benz, from Co. Clare, is the lactose intolerant lead singer and acoustic guitarist. Andre, from Brazil, is our Italian lead guitarist. Utku, from Cyprus, is the man in the hat. Oh, and he plays bass too. Daymz, also from Co. Clare, shares a birthday with Jennifer Love Hewitt (thats all he shares) and plays the cajon.

How long is the band together?
We’re together since summer 2013. So we’re just over 2 years old!

Where did the name come from?
It was something our inner pervert came up with. Frustration can manifest itself in two very obvious ways. Music is just one of them.

Which of you is the Mannequin?
Jeez, have you seen us??? No, no, the mannequin- whatever mannequin it is- is most certainly standing proud, slender and beautiful in a shop window wearing nothing but satin lingerie and a moulded smile. Her painted gaze and manufactured, mass-produced limbs beguile us to the point where we cast the obvious anatomical deficiencies to the wind and lose ourselves in her plastic embrace. We get thrown out of the shop soon afterwards.

Who has the highest sex drive? (anyone we should be worried about?)
Utku says he does, Andre probably should, Daymz thinks he doesn’t and I don’t think I know. So we’ll just say……. Daymz.

How many EPs/albums have you released to date?
Perfect Mess, our latest release, is our 6th single release to date. We currently have no EP’s or albums planned. Our attitude is that we’re slap-bang in the middle of a download ‘revolution’.

People, generally speaking, are more inclined to download what they like rather than buy, or even listen to, compilations of music in album/ep form. I guess you could say that MSD write and record i-friendly music. It’s varied in genre, tempo and aggression but it’s catchy, melody driven music. So it appeals to a wide audience. And for this reason, we put our music out there to download for free so if someone wants it all, they can have it all. If not, they can pick and choose. At the end of the day, it’s their music. We just write the songs.

How often do you play gigs?
As often as possible! As I said, we put our music out there for free. We can do that because we produce it ourselves but also because ‘live’ is where it’s at for us. We are a live band. That’s somewhat of a cliché but very true in our case. It’s where we see ourselves really making a splash, on the live circuit.

Studio is great and all but the energy, the power, the atmosphere and the feeling you get from a live performance beats everything. We have a few shows coming up over the next month or two so keep your eyes glued to facebook and twitter for info.

What has been you most favorite gig to date and why?
Probably a combination of a few… we played a show in Arthurs about a year back and it was probably the most fun we had with an audience so far. Then there was our first gig in Sweeney’s , which always gets a mention based on the sound we had there on the night. It was one of our first real outings as a band and to hear ourselves sounding like that was incredible.

Then there’s the recent gig we played in Opium Rooms as a guest at the PureM Awards, which gets a mention simply because it was our last show and we had a lot of fun… before, during and after. Next morning was a different story!

Where can people catch you next?
We’ve lined up a show in JJ Harlow’s on the 20th November. Hopefully there’ll be one or two extra dates to add before the year is out.

Any releases coming up?
We’ve just released ‘Perfect Mess’ at the beginning of October and so far the response has been really good. Up next will more than likely be a song called ‘Out of my mind’ but we don’t have a release date just yet. We’re hoping it’ll hit the interweb at some point in early November but it really depends on how lazy we are.

In the meantime, there’s always the possibility that we’ll record and release another acoustic session, where we play and record songs that we don’t get to play live very often. It’s just about giving a little something more to our listeners in Ireland and abroad. Coz they’re great!

Anything else you would like to add?
Nope! Just to remind everyone that we’re active on most online music platforms and that our music is free to download. The more people we get to listen, the more will hopefully pop out and catch our shows. The more people that come out, the more popular we’ll get. The more popular we get, the more abusive, cocky and outspoken we get. Then comes the drink and drug binges followed by the accidental overdose. And then, of course, the messy break up and the eventual murder trial. So if you want to get in on this from the start, just come to our next show.

If you want to learn more about these drink and drug binges or maybe get involved in a messy break up (everyone loves watching a bit of drama), check out this amazing band on Soundcloud, Facebook, Twitter, and YouTube.

The post Getting to know: Mannequin Sex Drive appeared first on Ceol Caint.