An interview with singer/songwriter Sam Ali 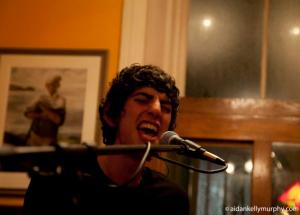 Originally from England, Sam Ali moved to Ireland at a young age marking a big change and the beginning of difficult times to come. Losing his mother to Cancer in his teens became a driving force for the musician as their relationship, and her encouragement of his music, spurred him to go on.

Following an education in Performing Arts, he fronted a number of bands before taking a different direction towards a solo career.

Sam’s music is easy accessible, relatable and would suit all tastes. His voice is sincere and sweet, not unlike Chris Martin with a touch of Paolo Nutini. With beautiful emotive lyrics which would make you close your eyes and listen, Sam Ali crafts an inspired fantasy of life, the world, the stars and beyond, sharing with you the depths of his imagination.

Ceol Caint are delighted to help you get to know Sam Ali:

How many EPs / albums have you released to date?
Im currently writing and recording my first solo ep. Slowly building up to a release. Really excited to unleash it but it’ll be around spring of next year. Just wanna get it perfect.

To find out more about Sam Ali and hear his music, connect with him on Facebook, Twitter, Soundcloud and Spotify.

Listen to Sam Ali “Sing Along” below:

The post Getting to know: Sam Ali appeared first on Ceol Caint.