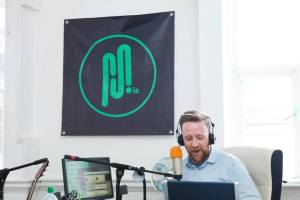 In celebration of two years on air, fully supporting and giving a platform to unsigned Irish artists, The Co-Present will have a birthday bash in Tower Records this Saturday.

Stalwarts of the Irish music scene, The Co-Present is run by Dwayne Woods and Gavin Hennessy and was set up in light of what Woods describes as “serious lack of Irish music getting airplay in this country.”

A Music Journalist in The Irish Daily Star at the time, Dwayne said he wanted to “create a platform where musicians could discuss their music, their favourite Irish tracks of all time and get their voices heard.” They also give the artists the live recordings for their own use.

Initially a weekly Radiomade broadcast, the show began with the simple concept of musicians coming to studio to co-host the show and play a few songs. However, over the years it has become a recognised brand from which on-location broadcasts and live events have grown.

With venues and events such as The Olympia, Whelans, The Roisin Dubh, Knockanstockan, Indiependnece, Sweeney’s and Phase One in Leitrim under their repertoire, Woods has big plans to keep growing the show nationwide.

Speaking to Ceol Caint, he continued “we are really keen to get up to Belfast and do a show. There is some great music coming out of that city right now and I would love to have acts such as Hot Cops, Girls Names and Pleasure beach in. Sinead O’Connor is always someone I would love to have in, I would be really interested in her favourite Irish songs of all time. We will be doing a show which is going to focus on Cork in December as well, but that’s all I can say on that for the moment. There is so much new music popping up that I don’t see any end to having plenty of new guests.”

While he plans the future and continuous growth of the show, he reflects on the fantastic guests that have graced the Radiomade airwaves over the years.

“I have had a great bunch of people come in and Co-Present the show with me especially Niamh Farrell and Princess Siwela who repeatedly took time out of their hectic schedules to come into the studio. They both brought something really special to the table and I want to take this opportunity to thank them both.  Also other co-presenters who came in such as May Kay, Sinead Ni Mhorda, Sinead White, Naoise Roo, Hazel Lake, Gemma Butterly, Joe Panama, and Stephen White I would have any of these beauts back on the show in a flash.”

Evolving from a two-hour radio show to holding a firm place in Irish culture, discussing important topics as well as playing great music, The Co-Present are not afraid to explore topics which mainstream media may shy away from.

Recalling his favourite Co-Present moments, Dwyane cites meeting The Villagers front-man Conor O’Brien on stage in The Olympia. In an emotive interview caught on camera, they discussed the equality referendum before knowing what the outcome would be.

“It was a very tense and emotional time for everyone in Ireland especially members of the LGBT community and conducting an interview on camera for the first time and in such a monumental Irish venue was extremely difficult for me. No one knew what the outcome of the referendum would be and I was a nervous wreck at that stage. However looking back we did the best we could and as soon as Conor started to sing tracks such as Courage and Hot and Scary Summer everything changed and I snapped out of my nervousness.”

As the referendum directly impacted Dwayne, this interview was particularly poignant, revealing a more vulnerable side of the presenter. “Being so honest and open about being Gay wasn’t something I felt comfortable with doing on camera. I walked away from that experience knowing that whatever the outcome of the referendum, everything was going to be ok because we fought hard and the support network was stronger than ever. Oh and of course the people of Ireland did the right thing in the end.”

All’s well that ends well in love and equality, and The Co-Present continues to develop despite some hurdles. Having had to temporarily relocate to Leitrim, Woods is embracing the time out to focus on what’s important and give the show a little makeover.

Determined to sustain its growth, he is positive about the future of the show continuing to be a driving force behind unheard Irish music.  “The Co-Present is something both Gav and I are very passionate about and after a few months of uncertainty about its future (mostly from me) I now think we will come back with a bang after a nice Christmas break.”

Heading into year three with a bang, The Co-Present will be doing a live radio show from Tower Records this Saturday, with some incredible acts in the pipeline. You can find all the information on the event Facebook page and look forward to being part of unique day of Irish music.

It kicks off at 12pm and admission is free.