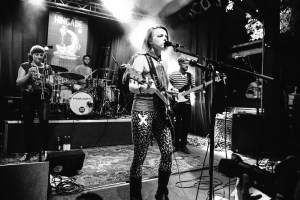 A household name on the Irish music scene, Wallis Bird spread her wings (pardon the pun) and soon gained international fame working from her base in Berlin. While many Irish musicians can struggle to achieve even national success, others set their sights on further shores and opportunities to expand their horizons; sometimes really paying off.

Wallis went with her Wanderlust, her love for the German capital, and a gut feeling about things working better for her abroad and carved a niche from which her music has flowed.

Living in Berlin for three years now, the singer said “I loved the city from the first moment I stepped foot here about 10 years ago. It just clicked with me and gave me inspiration”.

In 2004, she first set sail to Germany, living in Mannheim before heading to Brixton for five years. Eventually she settled in Berlin; never looking back.

“Personally a huge reason why I headed off was because I have wanderlust and don’t mind jumping into new things”, she continued. While her career in Ireland previous to that was moving forward, it was a slow but steady progress that needed to go to “the next level”;

“It was promising, but not clicking. I was progressing through the scene circuit, with about 5 years hard work before I started to gain real attention from listeners and insiders. At that stage I was looking after myself ok but I had done the miles and needed people I could trust that could take it to the next level. Then, just at the right time, the wrong people started making offers. I stuck it out alone for another while before I got a gut feeling from some guys I met from Germany. I hopped on a flight to check it out. Over a decade later and we’re still together”

A relentless bundle of energy who just keeps on giving, the passion Wallis has for her music shines from every orifice. Having seen her continue a gig despite her hand being cut and blood spilling all over the guitar, it is evident that this girl is one tough nut, and a musician like no other. She is dynamite, always ready to explode. This weekend she completed a twelve hour gig, and the verdict? Another twelve hours would not have been off the cards.

Feeling at the time she had “reached a wall”, the move from Ireland was necessary for her own advancement. However, she doesn’t rule out the possibility of what might have been if she remained in Ireland;  “I’m sure if I had met the right people in Ireland it would have been just as good, but it’s all just chance. I never really left Ireland, There’s a great team of us work together all year round.”

Citing her work ethic, rather than location, as the reason for her success, she admits to being very happy with how far she has come and what she has achieved;

“The only way it has visibly changed my story is that I’m now an ‘international’ artist as opposed to ‘Irish’. People look at that with an intrigued eye. Same way people think living in London is a success. But I am without a doubt Irish through and through, so where I come from and where I’m going has always been a major theme in my songwriting- I just want to travel that’s all.”

It is often noted that playing gigs on the continent is a sure sign of success, and many artist cite the difference between the Irish and in particular German music scene. From the point of view of an artist living there, Wallis explained;

“There’s a larger market because of the population here so that’s leads to more interest and more money for the arts: dodgy venues have amazing systems for example. Also Germans mostly play German music on the radio so that creates a healthier national economy, a clearer voice of the people and ultimately- pride (that wasn’t always the case- 10 years ago it was seen as uncool to sing in German and an absolute no-go to wave a German flag. A lot has changed) Popular music is mostly heavy progressive hip-hop with messages about cultural diversity and social issues. There’s not much of a ‘hype’ or showing off culture here so people just do their shit, work hard and party hard and may just be a very successful artist at the same time.”

While the German’s have a culture of taking pride in their music, Wallis reckons a similar national pride, and self-respect, is the change Ireland needs for musicians to gain some success. She also notes that an “active support and encouragement of all things Irish”, is important.

She finished by saying we need “more Irish music on Irish radio. Less pandering to other countries and their money. An across the board basic knowledge for the effort, the effect and cost of an artist. Creativity is culture and it is what defines nations and people. It makes us better, stronger, and… well, sexier. Money has none of the above.”

Check out an interview Rachel did with Wallis when she played Helium in Longford a few years back.

Note on the artist: Wallis Bird is originally from Enniscorthy, Co. Wexford, and in touch with music since she was first handed a guitar at six months old. She attended Ballyfermot Rock School, fine tuning her craft before playing the Irish music circuit and eventually settling in Berlin. She released four studio albums between 2007 and 2014; Spoons, New Boots, Wallis Bird and Architect, with Yeah! (a live album spanning across her career during this same time frame) coming out in August 2015. Constantly touring the Irish and European festival scene, she is one act you definitely should make it your business to see. Her energy could light up an entire city. You can connect with Wallis on Facebook and Twitter or keep up to date with her on wallisbird.com.