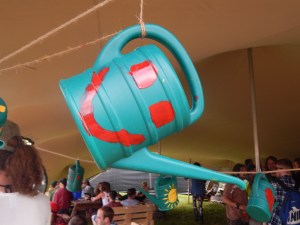 From the moment you drive through the rolling hills overlooking the stunning Blessington Lakes, the festival feels like it’s going to be the best yet.

Walking through the campsite, with perfect views all round, a zen feeling takes over. We have arrived at Knockanstockan. Then lies the problem…where to first? There is just so much.

Handmade goods hanging from trees, eclectic people dressed in all kinds of colours, stalls of wonderful crafts and of course stages and stages of fantastic music.

Stalwarts of promoting the Irish music scene, this is definitely one of the best festival line-ups of the calendar. From the Faerie Field, to The Wishbone Stage, The Burrow and more; the choice is never ending. Each stage having its own appeal, and own personality.

The Wishbone Stage was my personal favourite, not only was it fashioned in a unique manner; I marveled at how it was built, but the line-up from start to finish was incredible. Featuring Miriam Donohue, Jem Mitchell and Mollie Sterling to name a few. Before the music started there was some rather unusual and interesting  dramatic performances, including two girls shouting about Glenda Gilson. Also, a man whose lungs must know no need for breath as he played the didgeridoo for what seemed like hours.

Around the corner lay the beautiful natural amphitheater of the Faerie Field. Here lay the perfect setting for festival revelers to sit and soak in the sweet sounds of Sinead White (among many others of course). Throw in a few kazoos and the day was made.

The Burrow Stage was bursting full of life and energy from early on. Not only were people dancing, but they pulled others up from the crowd to dance and twirl with ribbons. The air is electric with excitement, with colour and even though many have partied all day and night they are ready to give it their all. This of course was amplified by killer sets from Rocstrong, the ever amazing White Chalk, the mind-blowing Mongoose and The incredible Eskies.

A community was formed at Knockanstockan, and it is evident from the atmosphere that the traditional festival feel is still alive. People are out to enjoy themselves and have a good time, and share that with others around them. Unlike other festivals where it’s unfortunate to see fighting, stealing and general unwelcome debauchery.

Music is alive and kicking in Ireland, and for festivals like Knockanstockan to showcase this on such a scale proves that it is a cut above the rest. As an independent festival, Knockanstockan have proved that passion, creativity and belief in what Irish music has to offer creates a great festival.

Looking forward to Knockanstockan Festival next year already. Check out the photogallery.