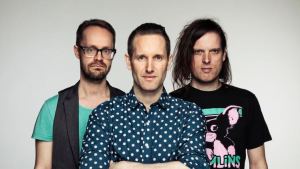 Dolan’s has been on the go in one shape or another for 21 years. What better way to mark the actual anniversary of their opening than welcoming back indie rockers Ash after over 10 years since their last visit to the Limerick venue.

Supporting them is Dublin band Otherkin who kicked off my Indiependence experience back in August. As ever their set is a high energy, full-on affair. However, even in the short few months since Indiependence it’s clear that their stage craft has become far slicker. “Love’s a Liability”, “Ay Ay” and “Feel It” are highlights of their support slot and certainly impressed those getting their first dose of the band. Incidentally, the band that supported Ash the last time they played Limerick was a little known band called Snow Patrol (whatever happened to them?). In fact the first time I saw Ash it was Muse who were the opening act, so let’s hope big things are in the offing for Otherkin; they certainly have the talent.

And so to the main act of the night; the last time I saw Ash was at their ill-fated appearance at this year’s Indiepedence Music Festival when Tim’s voice was stuck down with a serious throat infection. Initially there are concerns that something similar might befall Ash’s lead man tonight as over the first couple of songs there is an obvious strain on his vocal and he informs us that he has a bit of a cold. Thankfully he quickly gets into his stride.

There is certainly no holding back the hits for later in the set as 5 tracks in we’ve already been treated to “A Life Less Ordinary”, “Oh Yeah” and “Kung Fu” along with a couple of tracks from the latest Ash album “Kablammo!”.

One of the gig highlights is “Sometimes” which illustrates perfectly Ash’s ability to evoke teenage memories of loves gone by, blend them with a killer indie guitar riff and add a rousing chorus which the assembled crowd lap up.

The setlist is a perfect mix of old and newer material which is noticeably more raucous and robust than much of the earlier Ash catalogue “Evil Knievel” and the single “Cocoon” showcasing the latest long-player to good effect and there is even a cover of The Undertones “Teenage Kicks” thrown in for good measure.

However, as is to be expected, it’s the many hits on offer that the Dolan’s audience respond to best; you actually forget just how many great indie tunes the now 3-piece from County Down have been responsible for. “There’s a Star” with it’s James Bondesque backing track is just beautifully executed (Sam Smith take note), “Goldfinger” has lost none of the urgency it had when released back in 1996 and “Girl from Mars” is still a indie pop delight and the added coda to encourage an audience sing-a-long is the perfect way to ‘end’ the gig.

Of course there is the prerequisite encore before they are completely finished with us. “Angel Interceptor”, “Walking Barefoot” and the powerful “Burn Baby Burn” bringing the night’s proceedings to a searing close, leaving 3 beaming smiles from the stage reflecting the joy of their fans and a promise to return a little bit sooner the next time – I for one am looking forward to that already.