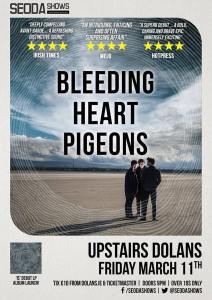 Friday March 11th was a watershed moment for a band whose development I have been closely following for over four years. It marked the very first headline performance of Bleeding Heart Pigeons; or as front man Mícheál Keating wryly put it on the night it was the first time people had bought tickets specifically to see them.

So despite a number of festival and support slots (particularly with stable mates Little Green Cars) there was certainly an air of nervous expectation in Dolan’s for the latest Seoda Shows presentation.

Other Creatures from Dublin were chosen to set the musical happenings in train. Not really knowing them, I was very taken with what was on offer with some excellent jangly guitar moments; very tasty bass work and nice vocal interplay between front man and drummer. They certainly are a well polished live act and I’ll track their progress with interest.

The reviews of “Is” the debut album from Bleeding Heart Pigeons have been universally positive (see my own here). This stimulated a huge amount of interest in the local Limerick music fraternity who turned out in considerable numbers to see could the band translate that studio genius to the live stage.

After what we were treated to on Friday night I think the answer to that question is a resounding “yes”. The band themselves are very understated in terms of stage presence with only few shy utterances from Keating throughout however their music is continuously engaging and often mesmeric.

The set kicked off with album opener “Frozen” with its split personality first settled us in and then injected us with urgent energy with its bold bass and staccato keyboard sounds. From there we were treated to a selection of the many highlights from the album including “Sister”, “A Song With No Meaning” and “They’re Cutting Down The Old Oak Tree” which Keating introduces as an old song which is true for the band given it was first composed when he was only 15.

Throughout their performance you get the feeling that the band could at any moment rip into full prog band rock-out but are mindful that the songs have scope enough to showcase their musical abilities without any unnecessary showmanship. Brendan McInerney providing the steady hand on the teller through out with his systematic drumming, with Cathal Histon adding his layers of multiple effects & atmosphere. All along Keating is a strong but subtle presence with his complex guitar playing and emotive vocals proving the perfect focal point for a band who, despite their relative inexperience on the live scene, display all the confidence that a band who have produced the album they’ve just released should have.

The night’s musical offerings were brought to a searing close with the dare I say it anthemic “A Hallucination”, then it was time for Bleeding Heart Pigeons to leave with a bow whilst those assembled left with smiles on their faces and a wonder as to what’s next for this Limerick band on the rise.

Bleeding Heart Pigeons support Pixies in Cork and Dublin on July 13th and 14th; their debut album “Is” is on release through Virgin EMI. The album is available to download, stream and on limited edition double vinyl.

Get a taste of Bleeding Heart Pigeons below: