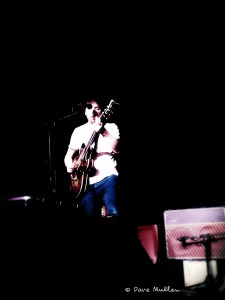 It’s Saturday night and a night of great music awaits in the wonderfully intimate brick walls of the Kasbah Social Club; the latest addition to the warren of entertainment that is Dolan’s in Limerick.

Before the main attraction we are treated to the virtuoso guitar playing of Figaro Sportelli who hails from Switzerland. His Latin roots seep through his performance 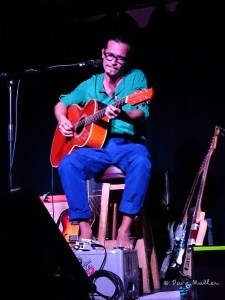 whether he is playing regularly or when he turns his instrument on it’s back and transforms it into a combination of slide guitar, beat box and some sort of vibraphone. Sportelli’s performance is passionate, inventive and the perfect starter for the main course.

Shortly after David Kitt or Kittser (as he is affectionately introduced to the stage by JJ our ever genial host) takes to that stage, armed with just a gorgeous Gibson Sunburst guitar. The initial section of his set has some lovely Lynchian overtones with the reverb adding an unerring edge to the likes of “You Know What I Wanna Know”, a very interesting cover version of “When Doves Cry”, that even the Purple One would surely approve, of and a broad selection of tracks from his extensive back catalogue.

It’s then time for Margie Jean Lewis to join Kittser on stage, she’s described as an Australian who speaks with a Dublin accent but who’s fiddle playing has a distinctive Australian accent. This is immediately evident as she adds a very Warren Ellisque accompaniment to Kitt’s guitar work which has changed to a more alt-country feel. We are treated to a number of crackin’ new tracks which afterwards Margie assures me have already been recorded and they are hoping to have at least an EP out next year. There is also a brilliant version of “Where Did You Sleep Last Night” (a song most famously covered by Nirvana) which sees Kitt and Lewis dovetailing brilliantly.

Up to this point the large collection of electronic gizmos that take up a sizeable portion of the stage have been left alone. However, the final section of the gig sees those unleashed to great effect with looping beats and all manner of electronic sound effects, which gives a hugely engaging & creative finale to the main proceedings.

Of course there is the traditional encore delivered without leaving the stage (which is becoming a norm these days) and we are treated to Kittser struggling to get going on one of his more recognised tunes “Songs from Hope St. – Brooklyn, NY” which he hadn’t planned to play but relented to doing due to the urgings of a number of his attending fans – but it’s certainly worth the effort despite the initial struggles.

And so ends the night, a perfect mixture of distinctive vocals, atmospheric guitar, inspired accompaniment and entertaining self-effacing raconteuring. We await with great interest and impatience the next David Kitt release.

Check out a video of the performance below. Hat tip to @ElectroRemedy for the photos and video!