Lofty reports back on Day Two of Electric Picnic 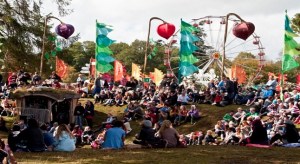 The first morning of Electric Picnic is always a tough one as the body reacts to the shenanigans of the night before and a not so perfect night’s sleep. However, one has a job to do so it’s time to get back into the spirit of things without further ado.

There’s no better way to do just that but to pay my first visit of the day to Body and Soul. On the main stage are Big Jelly whose joyful blend of ska and brass is the perfect pick me up. Over on the Earthship stage, the Stomptown Brass Band from Cork have a similar vibe going so the good vibrations are in full swing good and early.

Heroes in Hiding won their place at Electric Picnic by winning the RTE 2FM/Oxjam Play at Picnic competition; they are well worth their place with a very assured and passionate performance opening The Cosby Stage. They certainly have a sound that could appeal to the masses.

From there its over to the Leviathon tent in Mindfield where Dylan Haskins and Lisa Hannigan are hosting a live version of their Soundings podcast with a panel consisting of Colm O’Gorman, Eleanor Tiernan and Little Green Cars. The conversation is lively and focused around stories and thoughts that are Amusing, Inspiring and Shocking with Little Green Cars adding some wonderful acoustic renditions of some of their hits, along with a delicate version of Neil Young’s “Philadelphia”.

Next up is a lady who has just released her debut album. She is still in her teens but nether the less owns the Rankin Woods stage as if she’s been doing this for decades. The addition of a band allows her to deliver the layered sound of “Before We Forgot How to Dream” to great effect in a live context.

Over in the Jerry Fish Electric Sideshow, Brian Deady from Cork has the crowd on their feet delivering some upbeat soul grooves. He has a voice that would have held it’s own with many a Motown alumni and his band and backing singers provide the perfect platform for him.

Another Irish singer worthy of your attention is Dana Donnelly from I’m Your Vinyl; a band who have bring their infectious pop sounds to the main stage of Body & Soul. They bring their set to a close with a particularly lively rendition of “Erase It”.

When the lineup for this year’s Electric Picnic was announced, one of the obvious highlights on the bill for me was The War of Drugs, “Lost in the Dream” being on constant rotation on my stereo for weeks on end when it was released. Much like Ride the night before, The War of Drugs are consummate professionals who revel in delivering a performance to delight all the musos in the Electric Arena. Unsurprisingly, it’s “Burning” from the aforementioned album that’s my highlight.

Meanwhile, The Rubberbandits have The Comedy Stage crowd on their feet and of course bring proceedings to a rambunctious close with “Horse Outside”.

Hot Chip have been on an upward curve since their earlier appearances at EP and they look more than comfortable on the Main Stage. They come with a set full of their infectious electro hits, along with a nice smattering from their new album culminating in a fantastic rendition of Springsteen’s “Dancing in the Dark” (with a nice twist of LCD Soundsystem thrown in for good measure).

There’s electro knob twiddling of another variety back at Body & Soul as Meltybrains? bring their unique presence back to EP. It’s fair to say that they are probably a love them or hate them type of act but for me they are perfect for the Body & Soul main stage. It was great to see “The Vine “ live with synchronized stage dancing and crowd surfing to go with it.

If there are any aspiring lead singers out there that would like a lesson in stage presence then may I direct you to attend a Sultans of Ping gig as Niall O’Flaherty has it in spades. He holds the Jerry Fish tent in his thrall as they pump out their perfect blend of pop punk, O’Flaherty constantly playing with the pogoing crowd.

On my way to the main stage to catch Blur I had to stop into Natasha’s Cafe where Waterford’s The Dead Heavys were starting up. I’m a big fan of them and “Liquidator” is one of my favourite tracks of the year so its good to catch them live even if the cafe is a little quiet at the time. Kudos to Hazey Lake for putting a great line-up of bands all the way through the weekend to entertain the cafe’s punters.

And so to Blur who I’m actually seeing for the very first time. Their set is a mix of the many hits from their career, along with a selection from their new album. For me the highlight of the set is “There is a Low” (ironically) and the epic curtain closer to the night “The Universal” – all assembled are certainly very satisfied with what they’ve witnessed.

It’s then a very quick dash over to catch as much of Roisin Murphy as possible (musically that is). The Electric Arena is thumping and much like Grace Jones the night before she holds the audience in her thrall and apparently has outdone Miss Jones with her number of costume changes. “Hairless Toys” is one of the Irish albums of 2015 and here she delivers it with the perfect mix of menace and musical excellence; she is certainly a talent that deserves more recognition in her home country.

Final act of the night is young Jeremy Hickey or R.S.A.G. as he is better known in musical circles. Maybe its the length of time it takes to get the immense drum set up ready on stage, or just fatigue on my part after another full on day at EP but proceedings at The Salty Dog do little for me and before long I decide to call it a night. To quote Scarlet O’Hara “tomorrow is another day”.

Stay tuned for the final installment of Lofty’s Picnic report!