Lofty Reviews the Giveamanakick “We Are The Way Forward” 10th Anniversary Tour in Dolan’s, Limerick

Hat tip to Patrick O’Brien @patricko_brien for the photos 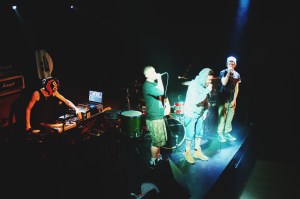 It’s Saturday night and it’s another trip to the wonderful warren of entertainment that is Dolan’s. Tonight’s gig has been literally 10 years in the making as Giveamanakick have reformed for one last tour of the battlefields in celebration of their sophomore album, “We Are The Way Forward” which is a decade old this month.

I’m in good and early to ensure not a minute of proceedings is missed. Giving the night a great kick start is the enigmatic Deviant & Naive Ted equipped with his decks, a myriad of electronic gizmos and a very funky Mexican wrestler’s mask. Delivering a set full of great funky grooves and some savage beats he certainly gets the crowd going, and the addition of talented local rappers Same D late on adds a welcome edge that sets us up nicely for the main act.

A quick onstage turnaround means that the crowd is still buzzin’ nicely from the support act when Steveamanakick & Giveamanakeith quietly amble on stage. They launch straight into the blistering “Ger Canning” from the first Giveamanakick album “Is it ok to be loud, Jesus?” (which just happens to be the theme tune of my Sounds from a Green World show Sat 8am/ Wed 9pm, 8radio.com).

Another track from that album follows before the band take their first breath (already dripping with sweat). Steve Ryan is a great frontman with a lovely wit about him as anybody who has seen him with current band Windings can attest too, so any brief break in the music is almost as entertaining as the raucous rock itself. He explains why they are back for this brief tour and how “We Are The Way Forward” was the album where they actually succeeded in getting the sounds in their head down on record. He then proceeds to inform us that they will be playing the entire album from start to finish with a couple of necessary breaks for “health and safety reasons” with a knowing nod to drummer Keith.

And then we’re off!! For those who have never seen GAMAK (the official abbreviation) the setup is similar to The White Stripes (turned up to 11 and even 12 in spots). Steve is on vocals and guitar and Keith on drums and backing vocals delivering an almost non-stop sonic wave of power guitar and unrelenting beats. Album opener “Bobby Dazzler” is as perfect now as it was back in 2005 and live is simply a joyous example of all that is good about GAMAK.

Each track is delivered with an energy and intensity which is every bit as ferocious as what was witnessed in the pre-gig Wales vs England rugby match. This necessitates a quick pause for breath (with the odd sneaky swallow of Jameson) every couple of tracks which band and audience are both grateful for as things have certainly got hot and heavy very quickly.

Other highlights from the rapid fire set include “Pocket of Silence”, “Suffer the Gowls” and “Spring Break” the latter’s vocal delivered by Steve, while wearing a microphone mask that wouldn’t have been out of place on the face of Immortan Joe in the latest Mad Max movie (see photo).

Before we knew it, it was time for the final track to be played for the final time by GAMAK in their home town EVER (as Ryan states some what emotionally) but what a way to go out. This was certainly a reunion that delivered for all who witnessed it and more importantly for the two gentleman involved. 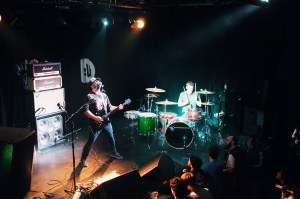