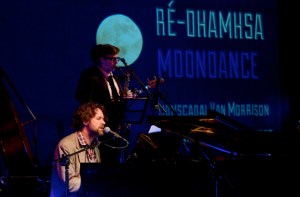 Those of you not familiar with The Van Morrison Project or its predecessor The Leonard Cohen Project let me state from the off that this is not a Liam Ó Maonlaí vanity project but a collaboration in the truest definition of the word.

With musical contributions from The Brad Pitt Light Orchestra and Hilary Bow, stunning visuals from Margaret Lonergan and excellent Irish translations from Gabriel Rosenstock and Cathal Póirtéir, the songs remain true their original form. They also benefit from a freshness of arrangement that the ensemble bring to the project, along with the added poetic feeling that singing in the native tongue generates.

“Tupelo Honey” and “Moondance” get us off to a rousing start and then we get our first taste of epicness with a searing version of “Ballerina”.

On a night when there are many highlights it’s the stunning version of “In the Garden” that gets the hair on my neck standing with Ó Maonlaí at first leading with a stark lonely piano before all of our assembled musicians contributing to a emotionally packed climax.

From that emotional hit we’re swept straight into “Dweller in the Threshold” which is stomping good fun with an array of images simply but effectively showing people in all sort of poses dwelling in many a threshold adding to the whimsical nature of the song and its delivery.

The first half of the show closes with Ann Blake of The Brad Pitt Light Orchestra delivering a fantastic vocal performance on “Cyprus Avenue” which leaves us thirsty for more never mind our interval beverage.

After a brief break our band of troubadours return with energies renewed which is immediately put to good effect with a savage rendition of “Let the Slave” from a lesser known Van Morrison album “A Sense of Wonder”. Actually what’s interesting about the show is that it’s often the lesser known songs that benefit most from the project’s treatment including “Contacting My Angel” which allows the earthy vocals of Hilary Bow to take centre stage again.

Not that the well known Van Morrison numbers are ignored “Did You Healed” “Into the Mystic” and “Bright Side of the Road” amongst others are all given their due.

The encore of “Gloria” brings the audience to their collective feet as our band deliver one of the most devilish, seductive and dare I say glorious versions of that song that I have ever heard with lead vocal duties being shared by the BPLO’s Blake Brothers and Ó Maonlaí with Ann and Hilary leading the audience in rousing chorus.

And with that we’re sent off into the night fully sated yet yearning for more, now where can we go for a auld moondance?

Find out more about The Van Morrisson Project on the Irish Language Literature Festival Facebook and website.