The Waterboys live in Limerick 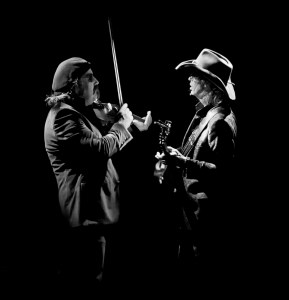 Last year The Waterboys came to the the City of Culture to celebrate the 20th birthday of a Limerick entertainment institution – Dolan’s. The wonderful people behind that mecca of music had such a good time they decided to have The Waterboys back to The Big Top at the Milk Market and weren’t we glad they did.

Straight away you know you’re going to be treated to a Waterboys’ gig with the rock switch firmly sent to “on” as they rip into two tracks from their latest album “Modern Blues”. We then get our first taste of nostalgia as Scott takes to the keys and they launch into a stirring version of “A Girl Name Johnny” which finishes with an elongated jam (the first of many).

Then it’s time for an early highlight for me. Ever since “Fisherman’s Blues” was released back in 1988, the track I constantly go back to from that album is the monster that is “We Will Not Be Lovers” with it’s searing guitar & vicious vocal; but live it’s Wickham who takes centre stage with his electric fiddle in an almost never-ending reverie that reaches out to very heights of the Milk Market’s Big Top and takes the ever adoring crowd with him.

After a couple of more ‘new’ tracks Scott teases that they’ve enough rockin’ done for the evening before launching into a blistering rendition of “Medicine Bow” which simply blows everyone away. They then settle into a comfortable groove particularly on “The Return of Jimi Hendrix”, which sees Scott at his lounge lizard best before joining Brother Paul on keys for a raucous finale.

The current edition of The Waterboys features Scott, Dubliner Steve Wickham and a classy collection of bluesmen from the US – Ralph Salmins on drums, David Hood on bass, Zach Ernst on lead guitar and the virtuoso wizard of the keys simply referred to as Brother Paul. They have been touring together for over a year now and it shows. They are really tight and obviously delight in the rock blues jams that they indulge in throughout the show, ensuring the newer material engages those who maybe looking for more familiar fare – there’s even a cover of Little Richard’s “Roll Over Beethoven” thrown in to proceedings.

Then it was time for the performance of the night, with the band having left the stage Steve Wickham and Mick Scott deliver a wonderful stripped down version of “Don’t Bang The Drum” – a magical musical two-step that had the audience entranced.

After the excellent “Long Strange Golden Road” we have the ultimate crowd pleaser and Waterboys’ anthem “The Whole of the Moon” which along with the encore of “Fisherman’s Blues” sees the crowd in full-on worship mode. The Waterboys in their current guise are true crowd pleasers and they certainly sent the assembled revellers into the night with satisfied smiles on their faces and that gorgeous electric fiddle ringing in their ears.

Photo Courtesy of Declan Courell. Please note that this photo is copyright to Declan Courell and available for sale, alongside other photos at https://www.flickr.com/photos/declancourell/album