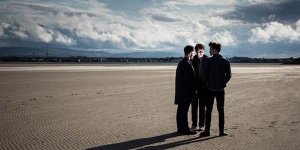 It’s been over 4 years since I first came across some demo tracks from a young county Limerick band called Bleeding Heart Pigeons. Even then they were producing music that set them apart from most of their peers on the Irish music scene, with long and strange song titles to match their esoteric musical output with the likes of “Angela I Never Ate the Porridge You Put Out For Me”.

So it’s has been with some delight that I have been listening to their debut album “Is”. “Is” is unlike any album that I have heard released in recent memory by an Irish band. When you add in the fact that there are four songs on the album that are over eight minutes long then you know you are certainly dealing with something different – but don’t let that put you off or you’ll miss something very special.

The three piece craft a complex collection of musical creations that both sonically and lyrically convey the frustration and angst of living in rural Ireland, with Keating’s lyrics charting the changes and challenges of growing up in and then breaking free from such an environment; if Thom Yorke had came from county Limerick he might have come up with something similar.

At times Keating’s Limerick accent breaks through which for me just adds to the album’s authenticity and his guitar work like his vocals regularly shifts from harmonious to tumultuous. At all times he is aided and abetted by the steady staccato drumming of Brendan McInerney and the excellent synth soundscapes that Cathal Histon provides.

Each listen of “Is” reveals a different highlight whether it’s the trading of soaring vocal & searing guitar on the epic single “A Hallucination”, the zealous yearning on “Sister” or the complete sonic assault at the climax of “Vapour”. “Is” is an album that demands the total investment of the listener and isn’t happy to sit as mere background music.

The debut album from Bleeding Heart Pigeons is certainly going to generate plenty of discussion and I for one hope that they get the exposure they deserve. There is something very special about this band and we should embrace and applaud that given the morass of sameness that infects the airwaves these days.

Bleeding Heart Pigeons “Is” will be released through Virgin EMI on 12th February with two headline shows, at Dolans in Limerick on March 11th and Upstairs in Whelans, Dublin on March 12th.

Listen to “A Hallucination” below: