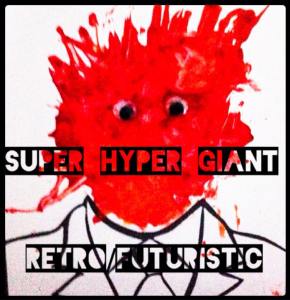 ‘Retro/Futuristic’ is the debut album from Super Hyper Giant, a band fronted by Dublin man Jonathan Savino. It is an extremely engaging pop record bursting with big themes about love, life, hopes and dreams

The album’s lead track ‘The Universe’ sets out the blueprint for the album with its universal themes and space references. Musically, the track and the album has plenty of beautifully atmospheric electronica and gorgeous guitar lines; with Savino’s sweet layered vocals underpinning the overall uplifting feel of the album.

That’s not to say that there isn’t plenty of variety on Retro/Futuristic – ‘Fantastic Voyage’ is epic in scale with a smidgeon of ELO type production to it which is more than fine with me. ‘Train Tracks’ with its bubbly processed acoustic guitar and vocal accompaniment from Laura Walsh is a celebration of a care free youthful past. ‘Sally Seems’ is a more serious affair with ominous lyrics on drowning set against an almost claustrophobic percussion and foreboding guitar. There’s also an appearance from ex-Smashing Pumpkins bassist Nicole Fiorentino on the experimental pop fest ‘Always’ which is an obvious single to this listener’s ear.

The album closes with a delicious bitter sweet duet of a love forlorn with Walsh returning on co-vocals and whilst the closing line “I’ll be the death of you” might seem like a downer ending, the way it’s delivered here is perversely alluring much like the conflicting emotions of a twisted relationship.

For me ‘Retro/Futuristic’ certainly lives up to it’s title with Savino’s musical references popping up throughout but with a signpost very much to the future. Safe to say that Super Hyper Giant has produced an album where the themes are giant, the execution is super but it’s certainly not too hyper for many repeated and enjoyable listens that unearth new discoveries every time.

Super Hyper Giant release ‘Retro/Futuristic’ on February 26th and launch the album with a live date in Whelan’s on March 4th.