The Man in Hat launches “Music for the Homeless” auction 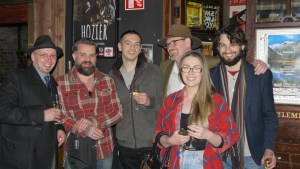 Through a unique auction, a once homeless barber is using music to help change the lives of homeless people across Ireland. Rachel Masterson caught up with The Music Man in Hat to find out about the “Whopper Irish Music Auction”.

Sometimes it takes seeing the world from a particular viewpoint to have empathy for those who need it most. It’s not often somebody has the opportunity to really make a difference in the lives of others. However, when that opportunity arises, it’s best to grab it with both hands.

Having been homeless for some time, Peter Meade understands the hardship faced by families all over Ireland who are finding themselves in similar, difficult situations. “There are about a thousand homeless children in Ireland at the moment” Peter explained, “no child deserves to be homeless”.

Better known as “The Man in Hat”, Peter has a unique insight into the struggles of homeless people. “I was homeless for seven years, through my own fault. You lose who you are, your sense of identity”.

He went on to explain the catch twenty-two faced by homeless people; “there are services available that would help them to stop being homeless, but they need an address to avail of these services.”

Realising that homeless people don’t have the means, and sometimes the right frame of mind to help themselves, he wanted to use his new-found stability to create something for them. 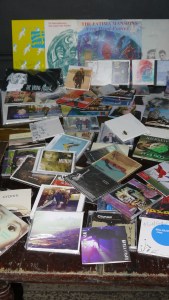 Establishing the concept of “music for the homeless” was a natural progression for the barber who helps to organise gigs in his workplace; Abner Brown’s barbershop. Using music to raise awareness of the crisis, The Man in Hat has already run two successful concerts, with proceeds going to homeless charities.

The current “Whopper Irish Music Auction” project was a brainwave which came to Peter, who has now accumulated the largest collection of autographed Irish CD’s ever. “We have signed stuff from Hozier, Gavin Glass, Glen Hansard, Carol Keogh, Mundy, The Edisons, Hot Sprockets, Imelda May; the list goes on. I would love to get something from U2. They’re on tour at the moment but who knows.”

Containing music from both well-known and up and coming Irish artists, the Irish collection will be sold in one lot, giving one lucky bidder an exclusive compilation of incredible music. The international artists CD’s will be sold separately, but with signed albums from Greenday amongst others, they’re sure to gain considerable attention.

The auction will take place online, with the launch date to be released soon. During a one of a kind gig in Whelan’s on June 18, the total raised will be announced. On the line-up are Gavin Glass, Carol Keogh and Cry Monster Cry, with more acts to be revealed. The gig will feature a raffle with more exclusive Irish music memorabilia up for grabs.

“I’m hoping to raise €25,000” Peter concluded, “but any figure would be great, it’s all for the homeless after all”.
Musicians are invited to contribute to the cause, by signing a CD and sending it to The Music Man in Hat within the next few days. Visit themusicmaninhat.com for more details.

The post Man pulls music from his hat to help the homeless appeared first on Ceol Caint.