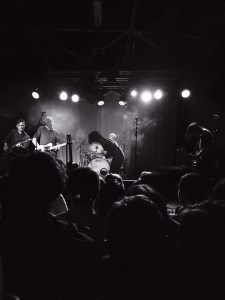 Last Saturday I had the pleasure of getting to see two bands that I have been playing on the radio since their early demo releases; Virgin Records label mates Little Green Cars & Bleeding Heart Pigeons.

As it happens I also saw both bands in action recently at Electric Picnic, but this is quite a different affair for Little Green Cars as they are fully amped up this time as apposed to their delicate acoustic set in Stradbally. For Bleeding Heart Pigeons it’s their first home town gig for nearly a year.

The wonderful venue that is Dolan’s is a buzz with the anticipation from the crowd. They are literally chomping at the bit to get into the Warehouse and snag a good vantage point for the night’s entertainment, and it’s not long before the opening act take to the stage.

Bleeding Heart Pigeons are many things – hugely talented, criminally under appreciated and obviously not the most comfortable with the additional requirements of playing live, other than being completely committed to delivering the most intense performances possible. It’s an absolute joy to watch a local band with such talent unleashing a sonic assault on the (for the most part) uninitiated Dolan’s audience. The set includes a number of tracks I haven’t heard previously, but all perfectly fit with the released repertoire of the London based Limerick trio.

Musically I would compare Bleeding Heart Pigeons to the more experimental side of Radiohead with their narky processed guitar, varied electronic sounds, stark rhythms and the soaring vocals of front man Micheál. All of these are expertly showcased on current single “A Hallucination” and “In The Forest, I Feel Bizarrely More At Home” (they also love long weird titles for many of their tracks). I certainly enjoyed their performance and I’m sure they won over a few new fans on the night, here’s hoping that they make the break through that their talents certainly deserve.

Then it was time for the main attraction as Little Green Cars kick off what will be there last gig on Irish soil for quite a while. It begins with a pair of brand new tracks from their sophomore album which we are assured will be with us “earlyish” next year – both feature the winning formula that has rocketed Little Green Cars to being one of Ireland’s leading bands. They have plenty of energetic interplay and their gorgeous harmonies.

In contrast to the support act, front man Stevie playfully engages and teases the fans throughout. Faye has certainly grown into her role as leading lady, much akin to the likes of Stevie Nicks. When she takes the centre stage on tracks like “The Kitchen Floor” and “Please” her voice holds the audience mesmerized.

We’re treated to a few more new tunes (but we aren’t told what any of them are called !!), one of which sees the band explode with a energy that certainly gets Dolan’s rocking early on in proceedings. Of course it’s the hit singles that light up the night with those fantastic harmonies showcased brilliantly on “My Love Took Me Down To The River To Silence Me” (have they taken lessons from BHP on naming tracks ?) and they bring the night to a close with a rollicking version of “The John Wayne” which they’ve developed into a beast of a live anthem any band would be proud of.

Then it was time for them to go and they are off to the US to lend Hozier some support in his continuing campaign to conquer the Americas; we wish them well and look forward to Little Green Cars returning to these shores with that promised second album. 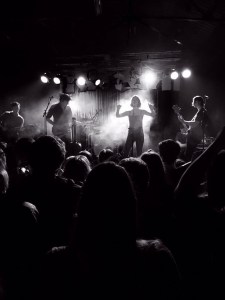 Big thanks to Paul O’Brien @Cooplafocal for the photographs!