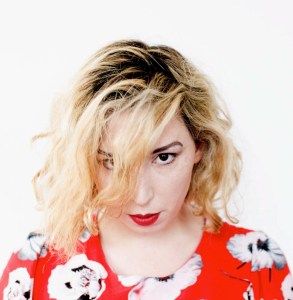 It’s a cool August evening in Dublin. Tuesday night, there’s free parking spaces everywhere and a warming glow coming from the lights that guide me towards the muffled sounds coming from the corner of D’Olier Street and College street. This is Doyles. The home of the Ruby Sessions since 1999 and over the last 16 years we’ve seen acts like Bellx1 and Kodaline strip themselves right down and lay themselves bare on the cosy little stage upstairs. Even the immortal Damien Rice and some other ginger bloke called Ed Sheeran have performed here in recent times. Tonight is the turn of Naoise Roo.

I get into the room just in time to catch the end of We Were Giants. The crowd are enthralled and the stage is set for the main act of the night to keep their blood flowing at a nice pace. It takes less than five minutes to make the switch between acts and Naoise walks onto stage. She looks nervous and stunning and before she even uses her deadliest weapon she already has the crowd. That lethal weapon is of course her voice. She is followed onstage by two casual, scruffy looking gentlemen who take their place on electric guitar and a set of bongos respectively.

A group of well oiled lads at the front of the stage are looking forward to this and everyone is in for a treat. Naoise says a little ‘Hi’ into the mic, the crowd pipe down and ‘Oh Son’ echoes around the room. Some crunchy guitar and the odd tap of a bongo compliment this gems dynamic and theatrical voice. She fills the room with her voice. The nerves are gone for now. The music fills the room as tightly as the crowd . Marc on the sound has been a stalwart of the Ruby Sessions since their inception in ’99 and he is spot on with the sound as always. It’s beautiful.

Now everyone from the stage monitors to the bar are chanting along behind Naoise’s empowering voice; “The next song is called Whore”. This girl doesn’t disappoint. It’s track 4 from her 9 track album Lilith, released in April of this year. The attention grabbing chorus‘I wanna be your whore’ rings through the room.
Next up is the haunting piece ‘For You – Postcard’. The bongo player is now picking an acoustic guitar and the electric guitar is echoed and delayed masterfully.The words ‘I never pray for myself these days’ haunt you. This lasts around 9 minutes but you just don’t want it to end.

The fourth and final track of the set is ‘Sheets’. This piece is honest, written by someone damaged by disappointment and false hope (aren’t we all?) and it compliments her voice and act perfectly.

The set ends. The crowd clap for a little longer than usual. Everyone here is a little taken aback from what just went down here. Naoise once again says her shy little thanks into the mic and escorts her musicians off the stage through the big red curtain behind them. Her job here is done. There are no encores in the Ruby Sessions I’m told and this ties in perfectly with a night that always leaving you wanting more.

Check her out on Soundcloud: