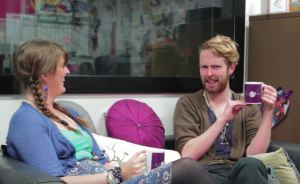 A sassy but soulful storyteller, Steven Sharpe tells tales about life and love with hilarious results. A blend of comedy with catchy lyrics and beautiful melodies, he has the ability to capture the reality of being gay, and the struggles faced on a daily basis.

A mix of spoken word, songs and theater, Steven has a unique way of portraying a message that speaks to a wide audience.

Speaking out about what everyone else is thinking but too afraid to say, but in a way nobody else could ever say it, he sing so everyone can relate.

Many songs communicate dating disasters that people of any sexuality can identify with. On a deeper level are the songs that emphasize the feelings surrounding coming out, family reactions and how it felt in the time leading up to the equality referendum.

Self-confessed about being angry on some of the issues and how some people can view same sex couples, Steven’s passion is evident in his music.

His lyrics are beautiful and truthful, while his performances are powerful, dramatic and entertaining. If you don’t know who Steven Sharpe is, you need to learn.

To start watch the first in the video series; A Cuppa With: Steven Sharpe.

Now check him out on Soundcloud.